By the treaty ECB can also lend billions (milliards) of euros to banks owned by an European States (and Greece) and MUST grant the same condition given to private credit institution.

The Greek Government, using a publicly owned bank, has the right to obtain a loan of billions Euros from the ECB at a 0,15% interest rate.

This legal right is guaranteed by paragraph 2 of art. 123 of the Treaty on the Functioning of the European Union:

The full text of the treaty can be found here:
http://eur-lex.europa.eu/legal-content/EN/TXT/?uri=CELEX:12012E/TXT

In other words, Greece Government can do the following:
– Create a publicly owned bank or use one already existing
– Provide this bank with public goods (like public enterprise, territory, facility etc) to guarantee the loans asked to the ECB.
– Have this bank participating at the auctions of the ECB
– Obtain from the ECB billions ( or milliard ) of Euros at 0,15% interest rate.
– Refinance the economy and development projects using the public bank, refinance debts of Greece at a lower interes escaping from defaults.

The European Union treaty grant this possibilities from 1993, but not a single government is doing that: WHY ?

For example, why Italy actually rent money from PRIVATE BANKS paying 3% or more of interest instead of loaning money from the European Central Bank at 0,15%?

Evidently the European Union and European Governments is controlled by bankers, You must know that European Central Bank are legally not
responsible for violation of treaty.

So, please write to Greek government to be the first to loan money from ECB at 0,15% by the mean of a public bank, escaping from the usury that already has reduced many greeks to suicide.

Please see this video (in italian) that explain how EuroSystem is financing private bank in damage of nations, so that Public DEBT of Italy is illegal 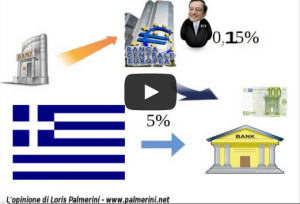 No Green Pass, Padova e Treviso unite per dire no.