Who does not vote confirms today's politicians (silent consent) 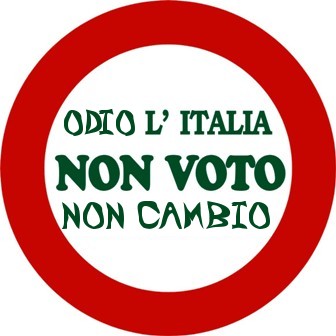 Returning to “vote” of the 28 March , Each region has a Regional Council made a few dozen people,

Take the case of the Veneto Region which 60 councilors.

Regardless of how much will go to vote, those chairs 60 chairs will still be occupied.

Passing, for regional elections will vote only Italian citizens, not as the municipal and European elections where vote also European citizens resident as Romanians, Austrians, Poles etc.

Then in the Council there will be

But if you will not vote all those who vote blue, la presenza parlamentare sarà a vantaggio dei rimanenti
Bianchi 33%
Rossi 33%
Blu 0%
Neri 33%

Then in the Council there will be

Since the blue are those who are disgusted by all, ecco che il non voto favorirà di fatto i partiti maggiori con una più alta rappresentanza, fake for another.

For more disgusted would be the only ones likely to vote new parties, and instead persuaded to stay at home in fact confirm the system or strengthen

THE VOTE DOES NOT PROMOTE MORE THAN THE USUAL NOTE CORRUPT

To break the eggs in the basket of rotten power, of journeyman, we must therefore go to the polls and vote for a small party medium, così da favorire il ricambio.

Or vote young or new movements, in spite of everything.

I do not do propaganda for votes for women, I consider them equal to men, and therefore I should be rated only if they deserve it. Non credo che una persona vada votata perché ce l’ha o perché non ce l’ha – anzi trovo discriminatorie le quote rose a danno dei maschi.

in conclusion, andare a votare anche nelle elezioni truccate ed illegali è l’unica maniera per rompere un po’ eggs in the basket of the banks that control the system.

Also be blank or cancel it with insults or poop, leads to the same result : si rafforza il voto di chi c’è già.

As I said in 1999, Go to vote and vote a party that you've never heard before.

TAR of Veneto: THE “people Venetian” does not exist ! the Veneto Region Elections incompatible with the Treaty of Lisbon (and unconstitutional)

Yet another research to refine the vaccination propaganda

A scientific research (1) showed that the propensity for vaccination is associated with “intellectual humility”, something that the authors themselves define as a virtue “characterized by the non-judgmental recognition of one's own intellectual fallibility”.The study investigated whether intellectual humility is linked to anti-vaccination attitudes and intentions to get vaccinated against the flu. […]