For the second consecutive year, Arezzo is the leader in exports 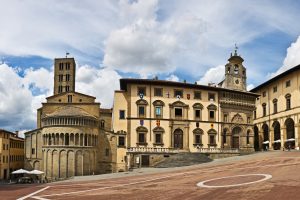 Understanding the data requires a minimum of knowledge, to become a computer expert I studied statistics from a young age, then I went to the Faculty of Economic Statistics in Padua, and finally I worked with numbers in different fields.

How are things then?

As usual you need to be careful of “chicken stocking”, concept for which if two people turn out to have eaten on average half a chicken each, in reality it may very well be that one person ate a whole chicken and the other not even a little’ .

In other words, it makes no sense to show export data grouped by province, as Istat does, because there are very small provinces with little population and others ten times larger and more populous.

How do you understand which are the provinces (and territory) with a greater export capacity of people ?

I took the ISTAT data, I added the inhabitants of each province, and I calculated the average export each 1000 inhabitants.

In second place Vicenza, that in the first six months of 2022 has increased the performance of the 19%, a real boom.

I understand that these two territories are based on the small and medium-sized enterprise model, and they show that it is a winning model despite the dire predictions made by the unions in recent times 20, the owls were blatantly wrong. However, from another analysis I did, it appears that exports per employee is much higher in companies with more than 50 employees.

Great surprise for Syracuse that in the first six months of 2022 has more than doubled exports, for now placing itself in third place. We should understand why, perhaps some special order made the difference.

The whole ranking of the provinces with the highest exports shows that the average provinces are the winners, Arezzo exports por-capita almost twice as much as Milan, which actually ranks in the middle of this partial ranking.

Because in addition to missing many provinces, we would have to discount the fact that the regional capitals are often the tax headquarters of companies, therefore places of imputation but not of production, that is, they export what is instead produced elsewhere and only invoiced in that city. The ranking should be adjusted with that of the place of production.

Unfortunately, the ranking is not further complete because I started from the Istat ranking.

the question is: when there will be a statistician at ISTAT showing useful data?

Like Loading...
Just talk about Neo Liberism, it is a fake of mass distraction Exit the Great Reset: information evening

Just talk about Neo Liberism, it is a fake of mass distraction

With the "Pandemic" of the Coronavirus 2020 we have seen a series of facts that clearly demonstrate that Western society is controlled by a powerful occult lobby which has been illegally trying for some time to create a dictatorial world government. This unveiling or revelation falls within the meaning of the term apocalypse that […]

These covid-19 vaccines really do?