A measles vaccine can lead to myocardial heart attack and cot death? 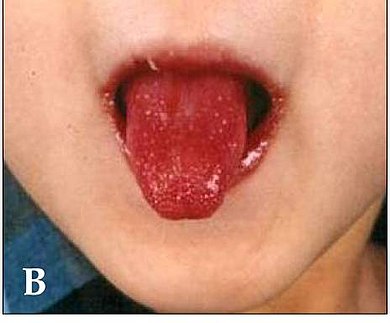 It is reported in the data sheet of Priorix GSK Vaccine (vivo) antimorbillo, antiparotite e antirosoliaÂ (a. 6) that “The following additional adverse reactions have been reported following vaccination with PRIORIX [..] General disorders and administration site conditions: Kawasaki Syndrome“.

Wikipedia says “The syndrome Kawasaki syndrome or mucocutaneous lymph node is a childhood vasculitis of arteries of medium and small size that mainly affects the coronary arteries. The etiology is still unknown. It is characterized by prolonged fever, rash, conjunctivitis, mucosite, cervical lymphadenopathy and polyarthritis of varying severity. If undiagnosed in time can lead to the infarto infarction.“.

What does it mean “in time”? The time of the heart attack of a few minutes? Two hours? Two days? Two months?

We already have statistical confirmation of the fact that more vaccine doses are given to children in the first year of life and more children die suddenly in the crib. He’ a scientific fact.

He’ Also statistically proven that the natural virus or “wild” of measles defends late in life from various heart attacks (but only those who are not vaccinated and took the natural disease). He’ a scientific fact. Here it does not seem risky to assume that natural measles is a human symbiont virus, evolved with it.

We also know that the vaccine can produce the same disease that wants to prevent, such as measles.

The numbers seem to say that the artificial viruses is not as symbiotically evolved than the natural, ending up producing the disease, She syndrome, Kawasaki, and many other adverse effects in the data sheet for this product.

At this point, the hypothesis of some doctors takes shape that by going to analyze with autopsy the cases of children who died suddenly in the cradle in the vicinity of vaccinations, one often finds a myocardial infarction.

But it is more risky to natural disease or the “artificial” vaccine?

It states that it is not nice to play with the lives of others, especially if children,Parents are not at all informed of the life-threatening risks of vaccination, and all this is prohibited by the Oviedo Convention.

Said this, we do not know how many dead there are after vaccination because there is no monitoring system worthy of the name, to say it was the Veneto Region that after monitoring “active” , that is, with the obligation to report adverse effects, has seen in the number ten times.

The numbers combined with the epidemiological statistics of serious countries that have been vaccinating for decades tell us about a failure of the goal.Adverse events of vaccinations are generally poorer than natural disease.

Only fools and the corrupt can deny these numerical evidence.

SONY DSC I must immediately specify that I am not a doctor, but what I write is the result of the study of research carried out by esteemed science professionals. He’ a fact that dementia is an increasingly widespread disease, especially Alzheimer’s, and more and more people are autistic or have learning disabilities, species […]

Plenty of anti-hoax sites have “certificate” that the news that the use of Ivermectin to fight Covid-19 has been approved in Japan is a hoax. As usual, they try to mask a substantial truth with half a falsehood. Below is the video in which the president of the Tokyo medical order, Haruo Ozaki,, clears the use of ivermectin. Era […]

Much scientific research demonstrates the medical nonsense of the Green Pass