Corona Virus, an act of war to China to get to the nano chip inserted all through mandatory vaccine. 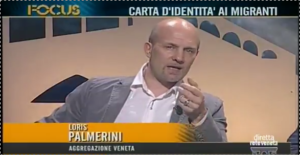 According to several Virologists (Gismondi, Bassetti, Capua, ) and many other experts (D’Anna) Corona Virus Covi-19 is not more dangerous than the regular flu, and it has already been running for months in large sections of the population giving rise to a low general mortality, and strikes, how each affects, mainly the already debilitated subjects who can die from complications.

So why the government's declared emergency ? How come the press mounted panic? Why posts of presidents and the Government of the Republic? Why the violation of constitutional rights?

A possible explanation is given by former secret agent Robert David Steel , 40 years of service. Here's a summary of what it says basically:

– the pandemic does not exist and the WHO is right not to declare it by releasing the funds, there is no emergency and the infection is over

– this alleged epidemic was created to arrive at the realization of the project ID2020, ie the personal identification of all through nano chip inserted with a mandatory vaccine against Corona Virus

You can listen to all in the video subtitled.

Steel is the name of Bill Gates as a great strategist, and this coincides with the lenders of the project ID 2020 which are the GAVI (which supports global immunization and that has made them imposing in Italy – supported by the Bill and Melinda Gates Foundation for vaccinations), Microsoft, Rockefeller-Foundation, Accenture, Therefore,

Steel argues that in this way we also wanted to target China from an economic point of view because it is threatening the current domination of satanic cult and pedophile .

Steel said he hoped that China respond to this act of war by killing them.

Mandatory vaccinations are illegal because they are contrary to the human rights of the Oviedo Convention, Subscribe to the list of those who claim his respect

Here are exposed many lies from the history of Italy

The history of Italy told in Italian schools is an almost complete falsification. Just to make me a little’ of advertising, In the lasts 25 I have consistently demonstrated for years that elections are rigged, the information is false, and the judiciary does not strike. Currently I have an ongoing proceeding against the Veneto regional elections of 2020, a systematic […]

Sitting at the computer for a long time produces cervical damage.

Bromhexine effective in preventing Covid-19 even in a Covid-19 ward.