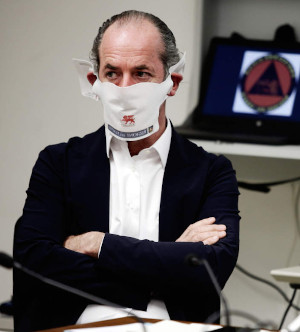 second the article by Marco Cremonesi of the Corriere della Sera the sentence "My freedom ends where yours begins" would have been attributed by Luca Zaia to Martin Luther King .

To me, however, it seemed rather one of those pre-packaged phrases used by people who have not had the good fortune neither to associate with humanly rich people nor the luck of a little’ of humanities, a phrase like those in chocolates.

Fra me e me, before delving into the validity of the quotation, I thought that it is still not correct to think of us human beings as a kind of separate spheres where the rights of each meet those of the others but at the same time separated by a clear boundary .

Unlike, it seems clear to me that the rights of each for a part are intangible (for example the right to life, due process etc.), but other rights are evidently intersected and mixed with those of others (for example environmental rights, the rights to democracy, the rights of minorities, the right to business) in short, the rights of the individual are also conditioned by those of others in a reciprocal manner, also with regard to future and past generations, which implies respect for the historical truth and traditional culture of peoples. In short, individual rights in society are obviously mixed and are not spheres.

The concept of Zaia seemed to me too basic for King and in fact King said “My freedom ends where yours begins.“. E’ already different since it speaks of the relationship of the rights of individuals and society, and King's sentence should be placed in context, also historical and cultural, to fully understand its meaning, if, for example, he put the individual and society on the same level.

But given that King's sense cannot be the sense that Zaia gave him, I'll just discuss the latter.

Zaia has placed this concept of the limits of individual freedom as a noble dogma in the context of the topicality of vaccination and the obligation to vaccinate, and instead is simply her son and, moreover, contrary to the law in force.

In fact, in the field of medicine, fundamental human rights (at least in geographic Europe) are recognized (not established, but recognized) by a wonderful international convention which is called Oviedo Convention, issued by the Council of Europe, ratified by the state, which in fact is a source equal to the Constitution for individual rights. Rather, the Italian Constitution on health (art.32) makes a generic reference to the fundamental rights of man, without defining them, and therefore it would be weak without the ratification of the Oviedo Convention.

And what these freedoms would be ? We're talking about, let's repeat it, of human rights in the field of medicine, of health, but also concerning embryos, DNA modification, the end of life etc..

The Convention states that “An intervention in the field of health cannot be carried out until after the person concerned has given free and informed consent.” Article 5, it's this one “General rule” is implemented through “.. adequate information on the purpose and nature of the intervention and its consequences and risks.“.

Unfortunately, those who are vaccinated today are subjected to a sheet to sign where in fact they assume all the risks, and the doctor does not make sure that the person understands, Rather, they don't even have time to read it. E’ clear that he does not receive adequate information to give consent, it is an extorted consent and as such constitutes a crime.

And unfortunately we are not talking about vaccinations alone, the field of health goes far beyond that, includes surgery, the use of drugs, and it is also mental and psychological health, the well-being of a massage or an aesthetic intervention is also health.

The Oviedo Convention is ratified by law no. 145 of the 2001, it is also commonly referred to by the judgments of the Italian courts and the Council of Europe (even against Italy) and it is even referred to in the ordinances of the Ministry of Health regarding embryos, transfusions etc..

Even the law on the end of life is nothing more than an implementation of the principle of non-mandatory care, that is, the possibility of rejecting them, therefore in the light of the Oviedo Convention the acquittal of the Englaro was obvious (which in fact recalls the Convention) and Cappato.

There are those who want to argue that it does not apply in Italy due to a convoluted circumvention of the will of Parliament, but the thing is simply unfounded and in case it would constitute a crime of subversion if actually committed . I'm dangerous claims that I have demonstrated unfounded in law, and what's more they are in clear contrast to the same that clearly states that the state “.. takes in its internal law the measures necessary to make the provisions of this Convention effective.“

zaia, like anyone, has a duty to respect these human rights, even in words, not just because they are protected by articles 2,32 , 10 the Constitution, but also because the Regions must implement the laws ratified by the State.

Instead, in his words he essentially denies the human right to say “no” to a treatment in the field of health, and declared “If we invoke freedom for anything, we lose the slightest sense of the common good. Today it's about vaccines, tomorrow any choice of public health.” .

Zaia's phrase sticks to the concept a “spheres” but it does not comply with the law because it denies the individual right not to forcibly undergo treatment in the field of health, including vaccines, even when the company wanted it in the majority.

also accusing those who do not vaccinate of causing the death of others as Draghi did, it means denying these human rights, it means being in violation of the Constitution, on the other hand, without any scientific basis, given that vaccinated people infect like non-vaccinated people, or maybe even more so when they get sick from the vaccine. We are already inundated with outbreaks born among people who are all vaccinated and buffered.

If I have not misunderstood the lesson of history, one of the biggest allegations made against the Nazis was that they conducted medical experiments on people and children without their consent, so much so as to constitute proof of the crimes condemned in Nuremberg.

Unfortunately it is time to open your eyes, we are seeing shameful instigations to discriminate against people who do not want to get vaccinated, and it is like denying the existence of human rights, not only of them, but of all. Who denies human rights to others, not only can he be arrested, but he could one day discover that he is equally responsible for immense economic damage caused by the nullity of the extorted informed consent.

There are positions that instigate to commit a crime against those who exercise the right not to be introduced into their body this experimental treatment which, moreover, is ineffective on the transmission of the Delta variant.. Even some journalists instigate hatred against those who do not want to get vaccinated, between them, Paradoxically, even some of Jewish origin such as the journalist Parenzo, which, on the other hand, rejects any similitude not realizing that it has the same forcing attitude as the injection.

E’ the manifest ignorance or premeditated violation of the Oviedo Convention is dramatic and unbearable, which is law, by the central and regional Italian institutions, and by journalists.

Unfortunately, we have repeatedly urged compliance with this Convention, starting with the Lorenzin law, asking the state for its respect, and asking Zaia to implement the never canceled Veneto regional law of 2007 which requires him not to force anyone to vaccinate.

Zaia says she has to do the work she is doing. I say that he must no longer do what he is doing because he is not entitled to it, from the beginning, the law does not recognize its legitimacy and requires the implementation of the Oviedo Convention. However and’ evident that it also hurts.

“Bad lending” , is a frese attributed to Marco Tullio Cicero, i did not study latin, but before pretending culture I control and so I avoid saying choc-Latin phrases.

From the mobile phone that listens to you to “good health pass” in your flesh No Green Pass, Padua and Treviso united to say no.