240 billion thrown by the Government, the crisis is provoked 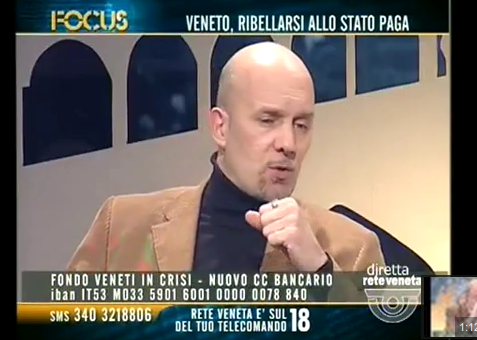 The companies that are closing, unemployment, the impoverishment of families and Italians, suicides, cutting services, are all things that could have been avoided and you can stop now, but the Italian government has not wanted to do it. Here because:

The public debt is approx 2100 billion euros, and the Italian state pays on it about 4% interest, about 84 billion Euros annually. A frightening figure when you think that all the layoffs in 2010 (already in full crisis ) it cost 18 billion euros.

THE 4% of interest is determined by the fact that the state asks for the money on loan from the "market", in short, to banks and private investors. But the Italian government has no obligation to do so. What can it do?

E’ foreseen by the Lisbon Treaty on European Union (It entered into force in December 2009 ) that the government, through its own bank, You have the right to borrow money from the European Central Bank (bce), who currently is lending with interest the 0,25% annual.

In other words, the Italian State can borrow money from the ECB through a publicly owned credit institution such as Cassa Depositi e Prestiti or the Italian Post Office. (which they are also a bank).

These entities are mostly publicly owned, and under government control they can receive liquidity on loan from the ECB but also from the national central bank (Bankitalia) that are part of the ECB system.

These state banks can refinance manufacturing activities and local authorities with money borrowed from the ECB, and they would pay in taxes only 4 billions of euros a year in interest on public debt, that in a few years would soon disappear . Already today it could be 1800 billions of Euros instead of the current ones 2100, and no sacrifice would be necessary, it could lead to charges 20% in few years.

Fantasia ? In Germany they are already doing this !! Here , now when you hear the SPREAD must consider the parameter of what the Italian Government and the leadership has been unable or delinquent. 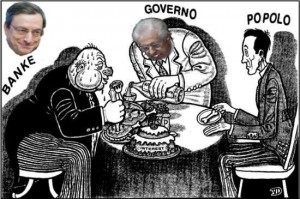 Failure to use by the Government of this tool of European regulations, has already done is a huge tax damage to the citizens and to the finances of the state of ben 240 billion euros!

Whose state is it?? E’ Your or their? Evidently it is from private banks, that with the government have depleted the savings of citizens by creating bankruptcy.

Now look at the situation: Companies that fail because of too many taxes, unemployed with no job prospects, families to despair, suicide, increasingly reduced essential services, sale of buildings and public goods such as service and water companies (how come if a referendum was held?).

All this is only the result of the incapacity or delinquency of the last governments, but remember that it is the banks and private investors to gain from the Italian public debt. Rather, going back in time we can discover that much of the public debt was created with accounting devices, false accounting with loans made debt.

I first talked about this possibility in 2012, and since then no party has been able or willing to fight to exploit this possibility given by the Euro, even when directly requested. These people are unable and / or offender must be sent home, or many of us lose the house, the job, dignity………

We are preparing a complaint to the Court of Auditors for loss of revenue, and it takes one for subversive association.
Want to help us out or you are totally resigned and plagiarized from their games?

Leave your address on this page, to stay informed and to subscribe to the complaint. Especially reports on the internet these facts, do not let people come teasing and impoverished.
If you do nothing, Now you know, when you ask yourself the reason for bankruptcy, look at yourself in the mirror.